You all did a great job at the parade this morning.  Thank you to all of you for playing so well and to all the parents for all your help and support.  We just received a phone call from the City of Richardson Parade Committee and they told us that you all won an award at today’s parade.  Congratulations!

If you would like to help us accept the award, please join us at Richardson City Hall by Santa’s Village at 5:00 PM tonight (Saturday, December 7).  Please wear a red shirt and hat just like this morning.

Parents must accompany their children to the short Awards Presentation.  This activity will not be supervised by the Music Learning Staff.

Bring a new unwrapped toy to donate to “The Network” as part of our entry fee for the parade.

near Lowe’s at Belt Line and Plano Road in Richardson.

The parade concludes approximately at 10:30 at the North side of Huffhines Park near Apollo & Plano Road.  There is a specific “Music Learning Parking Area” for parents.

Restrooms will be available at Lowes and Whataburger..

Even though we are in the second half of the parade, the organizers request that everyone arrive by 8:00 AM before the roads are closed.  Thank you for your understanding. 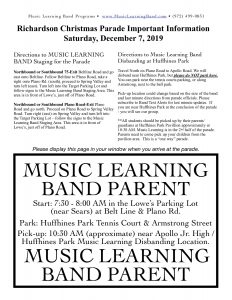 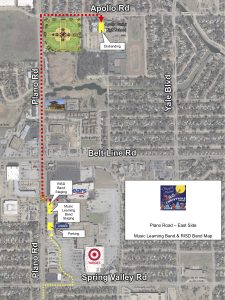